also known as the High Priest 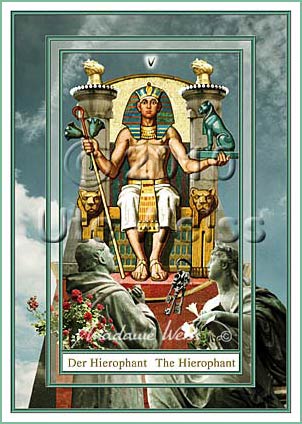 Trust and faith characterize here the person.
In the question it is certainly helpful to be aware of its traditional heritage and to follow your inner voice.
Personal adjustment efforts may then lead to the desired values ​​such as humility, kindness, and inner wisdom.
This card can stand for a believing, philosophical or spiritual leader.

Bias and lack of insecurity concerning the own personality, or rather the lack of basic trust, let people do things such as how to behave unconventionally.

This means instability, excessive sweetness or a willingness to secure their own advantage by flattery.

Unilateral beliefs that were meaningful in your live may change and clear the way for further development.

First you check and then you detach from old mottoes or ancient teachings, which you feel obligated. Allow is the magic word.